With the advent of e-commerce, retail outlets have to rethink their business model if they want to keep up because stores experienced little technological progress in 20 years. The solution is to offer more customer service. To achieve that, you need to have sales staff on hand to answer queries rapidly with a quality service.

In light of this context, Thoonsen will be presenting a range of new complementary shop technologies that are ready to increase your profits & customer satisfaction, manage your stock and lower shrinkage. One technology consists in wireless call buttons for customers who need advice and service in your fitting rooms & departments. This technology can be combined with RFID+EAS dual technology security hard tags to identify and quickly find the right products that your customers need, to improve store management and inventory processes. These security tags come with an automatic opening feature for self check-outs so they can be taken off safely by the customer once payment has been made. 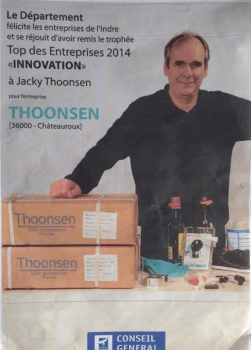 On December 19th, the Top of Innovation award was given to Thoonsen by the newspaper La Nouvelle République. For 10 years, Thoonsen has specialized in solutions against shoplifting and more particularly in the food market. But what makes the strength of the company today is its ability to innovate.

For Jacky Thoonsen, the creator of the company, this is the key to its success : "If we hadn't started innovating, the company would have closed." In awarding this prize, the Nouvelle République rewards the work done by the company in terms of innovation, with no less than 5 patents validated in France, 1 in China, 1 in the United States and the upcoming validation of patents in Europe, Brazil, Russia, China and the United States.